The Story Of Our Church

Watch our 30 minute video on YouTube “Memories and History of Emory Church.”
Video made by Mr. Wagner and narrated by Nancy Street. 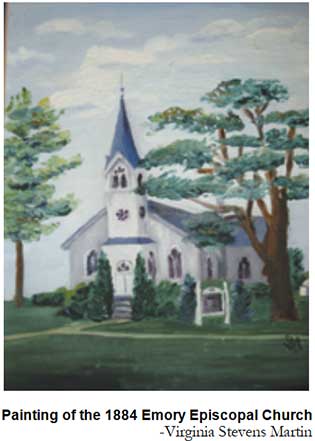 The original Emory Methodist Episcopal Church was built in 1849 and was named after Bishop John Emory, a leading intellectual of the Methodist Episcopal church during his lifetime. After the congregation outgrew the original church, a new church was built on the same property in 1884. In 1911, a steeple was constructed, complete with the bell that is currently mounted near the church’s entrance. A basement was dug to provide a Sunday school room, kitchen, restrooms, and a boiler room in 1935. The first Easter sunrise service was held on the lawn in 1960. 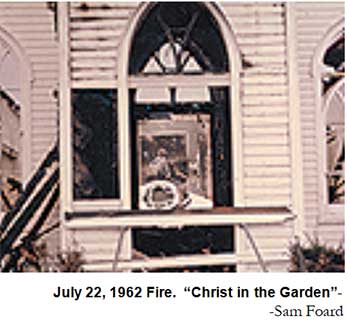 In the early hours of July 22, 1962, the steeple was struck by lightning during the height of a severe thunderstorm. Despite the valiant efforts of local fire companies, the church was damaged beyond repair. People who came to see the ruins were amazed to see the painting “Christ in the Garden” on the wall behind the pulpit showing plainly through the broken windows and burnt walls. Rev. Tom Starnes, the minister at the time of the fire, wrote in article in the August 1967 issue of Together magazine: “The unburned picture of Christ in the Garden is not a miracle, but rather a symbol that the spirit of Christ had lived through the fire – as had the real Emory church.“ 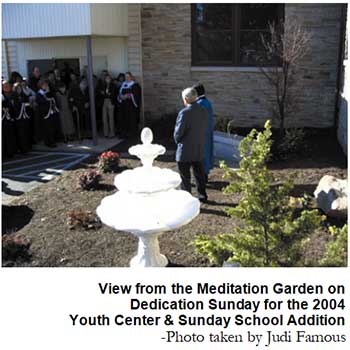 The congregation voted to build on the property that adjoined the cemetery that was donated by Edmund and Jennie Snodgrass. Construction began in July 1963, and the cornerstone was laid November 17, 1963. On June 21, 1964, the first worship service in the new church was held. Bishop John Wesley Lord consecrated the church on November 8, 1964, and the church was dedicated on December 3, 1973.

The dates inscribed on the cornerstone of the present Emory United Methodist Church tell the story: 1849 – 1884 – 1964. The completion of the youth center, meditation garden, and additional classrooms took place in 2004.

Here is another version of our story.  At the 100th anniversary in July 1949, the following information was given by Mr. Edmund Snodgrass, a lifelong member.

“According to legend, some people from this community attended a camp meeting being held at Rock Run near where the present Rock Run Church now stands. After returning they formed a society or group that met for worship in different homes in the community.

On July 2, 1849 Edward Morgan, then a large property owner in the community, transferred by deed the ground on which this church now stands to the following: Robert Andrews, Charles Dick, John Lee, Isaac Andrews, Benjamin Scarborough, St. Clair Street, Harry D. Gough, Edward M. Chew, and John Taylor and their successors (Trustees) forever in trust, that they shall erect and build or cause to be erected and built thereon a house or place of worship for the use of the members of the Emory Methodist Episcopal Church. The deed was recorded July 17, 1849.

The circuit of which Emory was a part was composed of eight churches, and was known as Castle Fin Circuit. Later the name was changed to Deer Park Circuit, and the records in the clerk’s office show it was called by that name as late as 1883.

The second church was built in 1884. The builder was John Allen, a member and class leader of the church. The trustees at the time were John B. Scarborough, William J. Harkins, John McFadden, Charles Allen, Nelson Scarborough, Franklin Rigdon, Parker B. Scarborough, Isaac Andrews, and George W. Andrews. Isaac Andrews was the only one of the original trustees on the board at that time.

In 1911 the steeple was built, a bell hung, and rung for services. The interior of the church was redecorated around 1929 by Briggs and Reisinger. In 1935 the members dug out for a basement under the church so as to have a Sunday School room, kitchen, restrooms, and boiler room. In 1958 the Shaw Construction Company re-plastered the interior of the Church, the rest rooms, and basement. A new carpet was added and the floors refinished. New wiring was put in and new lights installed. A new electric organ was purchased. This made the church built in 1884 modern in appearance, yet unique in its makeup. Shrubbery was put in by the young people and we felt happy in our accomplishment.”

Tragedy struck our church! In the early morning hours of July 22, 1962, during the height of a severe thunderstorm, the steeple was struck by lightning. In spite of the efforts of nearby fire companies, the church was damaged beyond repair.  The next day being Sunday, many people came to see the ruins and were amazed to see the painting of “Christ in the Garden” on the wall behind the pulpit undamaged and showing plainly through the broken windows and burned-out walls. Besides the picture, some of the pews, the organ, and choir chairs were saved by the firemen and members of the church.”   Rev. Thomas Starnes, the minister at the time of the fire, wrote in an article in the August 1967 issue of Together Magazine: “The unburned picture of Christ in the Garden is not a miracle, but rather a symbol that the spirit of Christ has lived through the fire…as had the real Emory church”.  (See “Christ in the Garden” photo 7/22/1962 that is hanging in the entryway hall).

On the day of the fire the District Superintendent, Dr. Clarence Fossett, met with the congregation at the Scarborough Grove and it was decided to rebuild the church. A Building Committee was chosen that evening.

Several churches offered their buildings for our use and for some weeks, services were held in the Ascension Episcopal Church. In September, 1962 services were moved to Mt. Vernon Methodist Church to continue there until the new church could be finished.

The Pastors of Emory Church